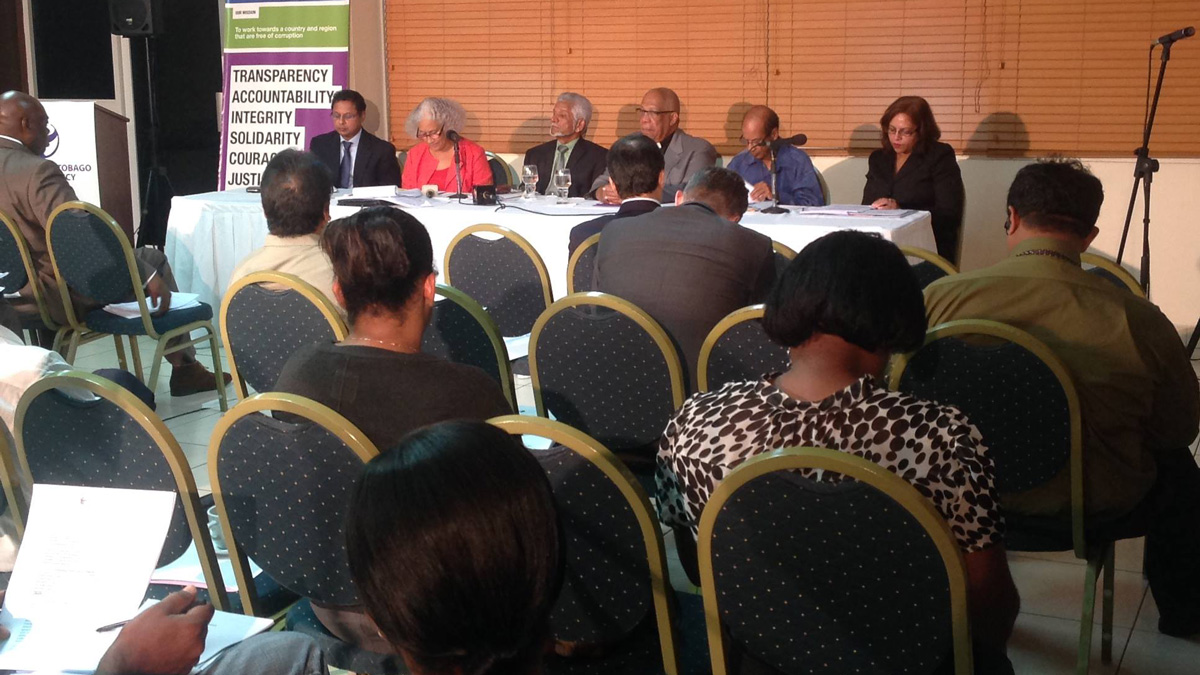 His Excellency Arthur Snell, High Commissioner for the UK, Her Excellency Lucita Moeniralam, Ambassador for the Kingdom of The Netherlands, members of the diplomatic corps, Mr. Karl Hudson Phillips SC, Feature Speaker, Mr. Ken Gordon Chairman of the Integrity Commission, honored guests, past and present Directors and Members of Trinidad and Tobago Transparency Institute, and representatives of the Press, thank you for taking the time to join us for our Annual Meeting of Members.

Today’s proceedings involve an accounting to our stakeholders of our activities for the year, and the refreshment of the mandate to our Directors to engage in another year of activities.

While the mission of TTTI remains unchanged, there is a continuing evolution of the way in which we pursue it. The fight against corruption and the pursuit of transparency are recurring features of political life in Trinidad and Tobago, and have contributed to the change of administrations. However, soon after new administrations take office on a platform of anti- corruption, their attitudes become amended, suggesting a paraphrasing of St. Augustine’s cry into give me transparency Lord, but not yet. Fighters against corruption and for transparency are painted as political adventures, agents of the opposition bent on removing the administration without giving it credit for the many improvements it has made and will continue to make over its predecessors. Most criticisms are met with the response that the predecessors in government were worse. No one wants to achieve change by starting with the man in the mirror.

In this climate advocacy can quickly become a voice crying in the wilderness, if its only thrust is one of speaking out in criticism and demanding change. Everyone sees the mote in the others eye but not what is in their own. Over the years TTTI has responded by modifying its approach to become engaged in projects that involve practical interventions and solutions that seek to build transparency and accountability into daily life in a positive way. We have supported and continue to support the improvement of public procurement regulations, the introduction of business ethics programs into small and medium sized enterprises, and the adoption of accountability systems by civil society organisations.

When we do speak out, we focus on principle and avoid attacks against the character of persons. Unfortunately, in our culture, dissent and challenge are seen as personal attacks, leaving the statement of principle ignored, with our contribution converted into an implied criticism of a person or organisation.

Trinidad and Tobago has to grow beyond the personalization of issues. If we are to live in a just and fair society, we have to agree to a set of principles that are accepted and applied to all. We cannot have situations where breaches of principles are overlooked because the predecessors were worse, or because a more effective job is being done. For principles to become an effective bedrock of our behaviour they must apply to all, otherwise someone will always be able to put forward reasons for exemption. When being measured against standards of behaviour based on principle, our politicians have to be able to let the chips fall where they may, and take the appropriate action that would show that all are being held to the same standard.

The fight for transparency and against corruption is not an idealistic and impractical pursuit. We have to remember that corruption hurts the most vulnerable sectors of our society, taking away the resources that would enable them to improve the quality of their life and create opportunities for their children. TTTI would like to express its appreciation for the support and encouragement it continues to receive, and promises to continually renew our efforts to make Trinidad and Tobago a better place for us all. As I demit the office of Chair today, I also take the opportunity to thank all of those who have provided me with their insight and guidance, in a role that has been described to me as dancing among elephants.