Guyana stood at 126 on the Transparency International 2010 Corruption Perception Index. That means that of the countries included in the last survey, our country was in the bottom third of the world’s most corrupt countries. We agree that numbers and statistics alone do not tell the whole story. Like any perception, the ranking may be better – but then again it may be worse. Whatever it is, the ranking reflects poorly on the country’s image, its reputation as an investment location and its characterization of all Guyanese. For those of us in Transparency Institute Guyana Inc. (TIGI), whatever the number is, we are not comfortable with it. We consider it the duty of each and every Guyanese to change that perception, as much for our country’s reputation as it is to stem and then reverse the corrosive effects of corruption, the damage it does to the economy and the cost to the poorer people in the country. We in TIGI are committed to bringing about that change through educational activities and engaging the private and public sector as a civil society stakeholder.

As reports and stories of corruption swirled around us, the time for a civil society body dedicated to fight corruption had arrived in 2010. Two years earlier, some effort at forming just such a body had been made but the several persons approached were too hesitant, or sometimes, afraid. The initiative was aborted. Then in early 2010, two individuals were invited by the Trinidad and Tobago Chapter of Transparency International to meet with persons from that country, the rest of the English-speaking Caribbean and representatives of Transparency International at a workshop on corruption. It was out of that workshop that the decision was taken to revisit the idea of a group committed to the eradication of corruption in the country.

This is not to suggest that corruption in this country is new or that efforts have not been taken to deal with it at various levels and by various groups in the society. Professional bodies such as the accountants and attorneys have long had codes of conduct regulating the behaviour of their members. Recently, the Georgetown Chamber of Commerce and Industry announced a Code of Ethics for its members. And at the national level, various pieces of legislation have been passed to prosecute cases of corruption. There is the Integrity Commission Act 1997 that requires public officials as defined under the Act to make an annual declaration of their assets. The Constitution provides for a Public Procurement Commission with the duty to ensure probity in the procurement process. It also provides for an Ombudsman to hear complaints from the public while a new Audit Act was passed in 2004 to strengthen the Audit Office. And importantly, the Public Accounts Committee of the National Assembly exists to oversee the proper execution of the national budget while more recently the Judicial Review Act of 2010
was passed by Parliament and subjects the actions of public authorities to review by the courts. Unfortunately the heavy concentration of power in a single office, the failure of the legal structures to prevent corruption, the increasing tolerance of corruption by our people, the inadequacy of the press and its absence from many parts of the country where corruption goes unreported, and corrupt elements within the law enforcement bodies, all constitute fertile ground for corruption, threatening the very foundation of our society and country.

Corruption has a debilitating effect on economic development. It unjustly and illegally takes away resources from the poor and the powerless while enriching certain powerful and corrupt segments of society. Discrimination thrives in a corrupt environment, the favoured benefitting from nepotism and cronyism, others suffering from deprivation and not unusually, victimization. All the evidence from studies and surveys – both in the nearly one hundred countries where national chapters of Transparency International operate and in others as well – point unmistakably to the proposition that the absence of corruption ensures a more progressive 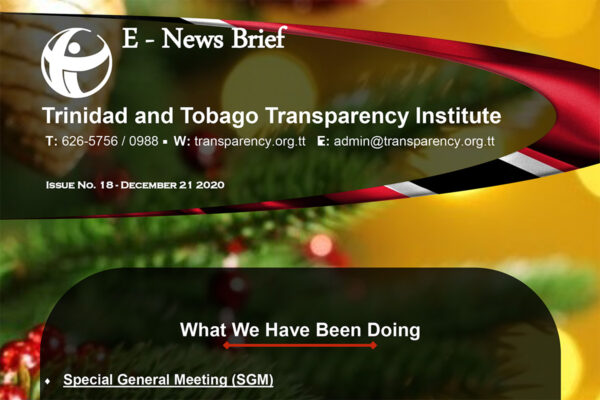